Let's look into the basic (and admittedly simplified) math behind these two important conclusions.

The goal of most DNA sequencing experiments is to identify locations where a sample differs from a reference genome. These can be single point mutations (e.g., SNPs, indels), translocations, copy number variations, or differences in the way the bases have been modified by external factors (e.g., methylation). In all cases, each location on the genome must be measured repeatedly until the actual base present at the location can be called with confidence. 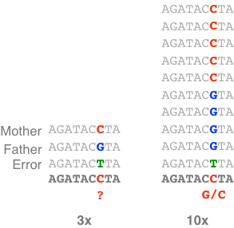 DNA sequencing depth is driven by the types of variations and the number of times a base value must be seen to call it with confidence.

A number of factors can lead to different measurements at the same location, including:

Each of these factors requires oversampling at a particular location to call the base (or bases, for polyploidal genomes) correctly. Most variant calling methods require 10-30x coverage at a given location to correctly call a base.

For a small genome such as E. coli with 5M bases, 10-30x coverage corresponds to 125-375 MB of sequence data (quality scores and meta-data increase the amount of data by about 2.5x compared to number of bases measured). For larger genomes such as human with 3 billion bases, 75-225 GB of  sequence data must be collected.

Increasing the number of reads to 5M starts to ensure that most transcripts may be counted at least once. However, more than one read is required to ensure detection and provide enough counts for differential expression analysis.

For RNA experiments, this sets a lower bound on the amount of data that must be collected. If the transcripts of interest are highly expressed, then only a few million reads are necessary. But, for rare transcripts, tens of millions of reads are needed.

RNA-Seq is based on read-counting instead of coverage. The goal is to assign read counts to a region of the genome instead of assuring even coverage across the whole genome. For counting experiments, shorter reads can be used, reducing the amount of data and instrument run time.  35-bp reads are generally considered sufficient for counting applications. (as an aside: longer reads and full coverage of transcripts are helpful for identifying transcripts and splice events, but for straight counting, they are not necessary)

Back to our discussion of data scale:  For studies that target highly expressed genes where 5M 35-bp reads is sufficient, 450 MB of actual data will be collected per replicate.  For studies that target transcripts with fewer copies in any given sample, up to 50M 35 bp reads may be required, or around 4.5 GB of data per replicate.  RNA experiments compare multiple samples with multiple replicates, quickly pushing the data scale for a single experiment into the 100s of GBs.

As these two examples show, basic tenets of biology and measurement systems determine the amount of data needed to answer specific questions using sequencing.  Without NGS instruments, these types of measurements would not be practical.

As a stopgap to reduce data scales, different prep methods have been developed to target specific regions of the genome. Exome sequencing sequences only DNA in known coding regions. Gene panels have probes for transcripts of interest along with a few reference transcripts to allow for targeted differential expression studies. In a future post, we'll look at how these methods trade depth for specific data and discuss whether or not they offer an improvement over microarrays.

This entry was posted in NGS