The latest installment of our blog posts on the Lab7 Systems team features our Principal Software Engineer, John Eargle, Ph.D. John was the 4th Lab7ite, having joined about 3 months after the company was founded. Since then, John has toiled away making sure that the Enterprise Science Platform (ESP) not only performs well, but that it looks good and is user-friendly. John grew up surrounded by academics and completed his undergraduate studies at the University of Texas at Austin. He followed this up with his doctoral work at the University of Illinois. John's insight and sharp wit make him a joy to have around in the office.

Question 1:  What is your role at Lab7 Systems and how many different hats do you wear?

John: Right now I'm mostly involved in designing and creating the product. I’ll start with notes from users or comments made during design meetings, develop more precise requirements, design the underlying data models and algorithms, and then code it up. Since I was a research scientist for several years, I try to provide a scientist’s perspective in design meetings. 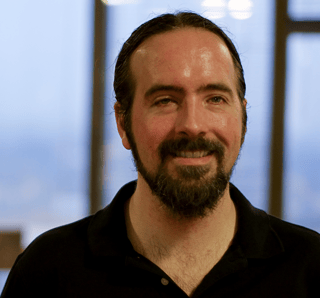 Question 2:  What made you want to join Lab7?

John: I'd actually been looking for biotech startup jobs for months, and I hadn't really had much luck. I wanted to work for a company that was just starting up, but those companies tend not to have much of a web presence yet. One of my friends had heard about Lab7 and knew I was looking for startups so he introduced me. Since it was at the very beginning, I basically made my decision based on the people and the initial business plan. All of that communication was just through email and phone, too. I didn't actually meet anyone face to face until I came down to Austin to find an apartment.

Question 3:  What do you think is Lab7’s biggest challenge?

John: I think our biggest challenge is educating the market about ESP. We can't point to existing products that customers are familiar with and say, "we're like X, but better," or "we're like Y, but cheaper." Our system is bigger than just LIMS, and it's bigger than just pipeline management.  It's also not limited to handling only NGS data or data from humans. ESP can run pipelines in the cloud or on local clusters. Also, users aren't tied to a predefined set of workflows, pipelines, or analysis tools; they can modify what's there or add new pieces if they want. The system has been built to be so general and flexible that it's difficult to describe in just a few words.  [John, you want a job in Marketing? – Ed.]

John: My biggest career influences come in three sets. The first includes UT Biology professors Robin Gutell and David Hillis who were my undergrad thesis advisors. I was a computer science student, and even though I hadn't had any college level biology courses at that point, they were by far the most excited professors that I approached in my search for advisors. Their guidance and enthusiasm got my career pointed in a bio direction. The second big influence is my Ph.D. advisor Zan Schulten, who mentored me through several research projects in biophysics and evolutionary analysis. She also encouraged me to do a lot of tool development which really prepared me for my work at Lab7. The final group consists of my father, Marvin Eargle, and an old housemate of mine named Steven Hazel. I watched both transition from careers in large corporations to small startups, and it convinced me that I'd really enjoy working in the startup world.

Question 5:  Who is your favorite scientist and why?

John: Carl Woese is probably my favorite scientist. I sat in on one of his seminar courses at UIUC, and he worked on some projects with my advisor, Zan, so he sometimes participated in our lab meetings. He possessed an enormous amount of detailed knowledge about translation (protein synthesis) and its various manifestations throughout the tree of life, and he was very adamant about precision and clarity in scientific communication. Also, he stood by his discovery of Archaea and endured a lot of hostility from the biological community, and though it took a few decades, his ideas are now widely accepted.

Question 6:  What do you like to do for fun?

John: I really like travelling and trying out new food and drink. Physical activity is important to me so I've chosen to live at a location that lets me walk or bike to most of the places I need to visit regularly, like work, coffee shops, restaurants, and grocery stores. I also read a wide variety of material including novels, textbooks, scientific literature. There's always more to learn.

Question 7:  You're a connoisseur of whiskey, and you are working on your Japanese skills. What are your thoughts on Japanese whiskey?

John: I'm not sure I've had any Japanese whiskey yet, but I'm a huge fan of shochu. There's a ton of variety in shochu because there are lots of little distilleries around Japan (here are just a few), and the liquor can be made from different plants, like rice or sweet potato. I've liked all the shochu I've had.

This entry was posted in Education, L7 Informatics News